On June 16, 2020 a World Trade Organization (“WTO”) panel (“Panel”) which was established by the Dispute Settlement Body (“DSB”) issued its report regarding the ongoing intellectual property rights dispute between the State of Qatar (“Qatar”) and the Kingdom of Saudi Arabia (“Saudi Arabia”). A summary of the Panel’s findings and its response to Saudi Arabia’s attempt to invoke the “security exception” provisions of Article 73 of the Agreement on Trade-Related Aspects of Intellectual Property Rights (“TRIPS Agreement”) is set out below.

Subsequent to the imposition of the blockade of Qatar in 2017 by each of Saudi Arabia, the United Arab Emirates, the Kingdom of Bahrain, and the Republic of Egypt, Saudi Arabia prohibited beIN Media Group (“beIN”) from broadcasting its copyrighted sporting events in the country.[1] Shortly after this prohibition a new content provider in Saudi Arabia called “beoutQ” began broadcasting pirated content belonging to beIN and other third party intellectual property rights holders.[2] 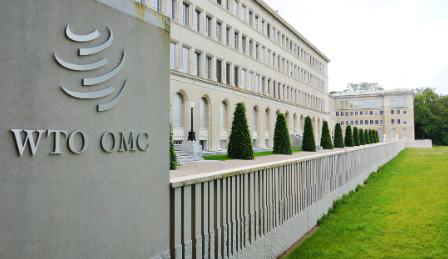 Originally the pirated beoutQ content was primarily sports-related, but later pirated broadcasts included copyright-protected television shows and movies for which beoutQ had no copyright or broadcast rights.[3] Although copyrighted material and the broadcast thereof are governed by Saudi Arabia’s Copyright Law (Royal Decree No. M-41), Saudi Arabia refused to take measures to enforce beIN’s and other third parties’ copyright rights. Specifically, the authorities in Saudi Arabia refused to impose criminal procedures and penalties on beoutQ as was required by the Copyright Law.[4]

Furthermore, Qatar and beIN discovered that beoutQ was openly selling beoutQ-branded set top boxes throughout Saudi Arabia and other countries, and beoutQ was also using certain Arabsat frequencies to broadcast its pirated content.[5] On the basis of these alleged intellectual property and copyright violations Qatar first requested consultations with Saudi Arabia (which refused to participate) pursuant to Article 4 of the Understanding on the Rules and Procedures Governing the Settlement of Disputes (“DSU”), and then requested the establishment of a DSB panel in accordance with Article 6 of the DSU.[6]

The Panel was established on December 18, 2018 with the following terms of reference:

To examine, in the light of the relevant provisions of the covered agreements cited by the parties to the dispute, the matter referred to the DSB by Qatar in document WT/DS567/3 and to make such findings as will assist the DSB in making the recommendations or in giving the rulings provided for in those agreements.[7]

In its submissions Qatar argued that Saudi Arabia had adopted certain measures resulting in the following:[8]

The specific measure to which Qatar referred were the following:[9]

Members shall ensure that enforcement procedures as specified in this Part are available under their law so as to permit effective action against any act of infringement of intellectual property rights covered by this Agreement, including expeditious remedies to prevent infringements and remedies which constitute a deterrent to further infringements. These procedures shall be applied in such a manner as to avoid the creation of barriers to legitimate trade and to provide for safeguards against their abuse.

Article 42 of the TRIPS Agreement contains the following language:

Members shall make available to right holders civil judicial procedures concerning the enforcement of any intellectual property right covered by this Agreement. Defendants shall have the right to written notice which is timely and contains sufficient detail, including the basis of the claims. For the purpose of this Part, the term “right holder” includes federations and associations having legal standing to assert such rights.

Parties shall be allowed to be represented by independent legal counsel, and procedures shall not impose overly burdensome requirements concerning mandatory personal appearances. All parties to such procedures shall be duly entitled to substantiate their claims and to present all relevant evidence. The procedure shall provide a means to identify and protect confidential information, unless this would be contrary to existing constitutional requirements.

Article 61 of the TRIPS Agreement provides as follows:

Members shall provide for criminal procedures and penalties to be applied at least in cases of wilful trademark counterfeiting or copyright piracy on a commercial scale. Remedies available shall include imprisonment and/or monetary fines sufficient to provide a deterrent, consistently with the level of penalties applied for crimes of a corresponding gravity. In appropriate cases, remedies available shall also include the seizure, forfeiture and destruction of the infringing goods and of any materials and implements the predominant use of which has been in the commission of the offence.

Members may provide for criminal procedures and penalties to be applied in other cases of infringement of intellectual property rights, in particular where they are committed wilfully and on a commercial scale.

In its report the Panel made numerous conclusions and findings with respect to Saudi Arabia’s TRIPS Agreement violations and other matters. These included the following:

Nothing in this Agreement shall be construed:

(a) to require a Member to furnish any information the disclosure of which it considers contrary to its essential security interests; or

(b) to prevent a Member from taking any action which it considers necessary for the protection of its essential security interests;

(i) relating to fissionable materials or the materials from which they are derived;

(ii) relating to the traffic in arms, ammunition and implements of war and to such traffic in other goods and materials as is carried on directly or indirectly for the purpose of supplying a military establishment;

(iii) taken in time of war or other emergency in international relations; or

(c) to prevent a Member from taking any action in pursuance of its obligations under the United Nations Charter for the maintenance of international peace and security.

As is clear from its language the purpose of the Article 73 “security exceptions” is to recognize the sovereignty of member states and to permit them to act contrary to certain international treaty obligations where a legitimate security concern exists. It is for this reason that several other nations notified the Panel of their interest in participating in the Panel proceedings by submitting third party arguments regarding this issue. The third party participants included Australia, the Kingdom of Bahrain, Brazil, Canada, China, the European Union, India, Japan, the Republic of Korea, Mexico, Norway, the Russian Federation, Singapore, Chinese Taipei, Turkey, Ukraine, the United Arab Emirates, the United States and Yemen.[22]

On the basis of Saudi Arabia’s attempt to invoke the Article 73 security exceptions (specifically Article 73(b)(iii)), the Panel was required to determine whether “the measures that, directly or indirectly, have had the result of preventing beIN from obtaining Saudi legal counsel to enforce its IP rights through civil enforcement procedures before Saudi courts and tribunals (i.e. the anti-sympathy measures), and/or Saudi Arabia’s refusal to provide for criminal procedures and penalties to be applied to beoutQ, constitute ‘action which [Saudi Arabia] considers necessary for the protection of its essential security interests … taken in time of war or other emergency in international relations’“.[23]

Considering that the language of Article 73(b)(iii) of the TRIPS Agreement is identical to Article XXI(b)(iii) of the General Agreement on Tariffs and Trade (“GATT”), the Panel based its analysis of the invocation of the security exception in Russia – Traffic In Transit, a recently decided WTO panel case dealing with the same issue under GATT.[24]

In Russia – Traffic In Transit, a panel held that the panel, rather than a member, must determine for itself whether the invoking member’s actions were “taken in a time of war or other emergency in international relations”.[25] Furthermore, a panel’s review of whether the invoking member’s actions are ones “which it considers necessary for the protection of its essential interests” requires an assessment of whether the invoking member has articulated the “essential security interests” it is seeking to protect.[26] Based on the Russia – Traffic In Transit panel’s analysis of Article XXI(b)(iii), the Panel identified that assessing the invocation of Article 73 required determinations as to the following:[27]

a. whether the existence of a “war or other emergency in international relations” has been established in the sense of subparagraph (iii) to Article 73(b);

b. whether the relevant actions were “taken in time of” that war or other emergency in international relations;

d. whether the relevant actions are so remote from, or unrelated to, the “emergency in international relations” as to make it implausible that the invoking Member considers those actions to be necessary for the protection of its essential security interests arising out of the emergency.

Due to the current political situation in the region, namely the blockade of Qatar, the Panel determined that an “emergency in international relations” does indeed exist, and that Saudi Arabia’s actions, including the anti-sympathy measures and the non-application of criminal procedures and penalties to beoutQ, were taken in a time of emergency.[28] The Panel further determined that Saudi Arabia had sufficiently articulated the relevant “essential security interests” it was seeking to protect.[29]

The Panel then sought to apply the actions of Saudi Arabia to the analysis. In doing so it found that while the imposition of anti-sympathy measures may meet a minimum requirement of plausibility in relation to the proffered essential security interests, Saudi Arabia’s refusal to apply criminal procedures and penalties to beoutQ did not meet the minimum plausibility requirement as applying such penalties would not require any entity in Saudi Arabia to interact with beIN or any Qatari national.[30]

Brazil adopted a similar position in its arguments, stating:[31]

[Brazil] fails to see how [Saudi Arabia’s] proffered essential security interests, or any country’s essential security interests for that matter, could be protected by allowing the operation of a copyright pirate whose broadcasts have spread beyond the respondent’s borders and encompass not only the copyrights held by the claimant’s nationals but by other countries’ nationals as well, including Brazil’s.

Similarly, the European Union stated that:[32]

In setting out its conclusions, the Panel found that:[33]

With respect to Saudi Arabia’s attempt to invoke the security exception pursuant to Article 73(b)(iii), the Panel found that:[34]

Shortly after the Panel issued its comprehensive report, Saudi Arabia announced that it was permanently cancelling beIN’s license to broadcast its copyrighted content in the country.[37]

The WTO Panel report, and Saudi Arabia’s subsequent cancellation of beIN’s broadcast license are important as they demonstrate that beoutQ engages in ongoing wilful copyright piracy on a commercial scale, that Saudi Arabia has supported such widespread piracy through failing to take any action against beoutQ, that Saudi Arabia acted contrary to its obligations under the TRIPS Agreement, and that despite the Panel’s recommendation Saudi Arabia permanently terminated beIN’s broadcast license demonstrating its refusal to honor its obligations under the TRIPS Agreement.